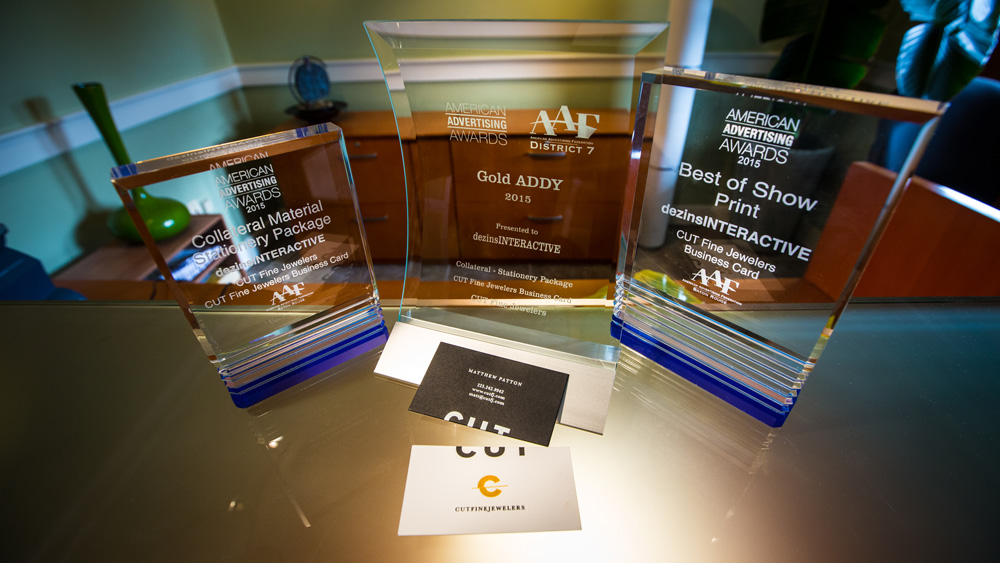 With four generations of jeweler genes, Matthew Patton has always had a love for gem stones and design. After he realized his vision was different than the one he had known, he wished to open his own interactive showroom, complete with innovative technology. In early 2014, he wanted to bring his idea to reality.

Patton explained he met with three other agencies before ultimately going with dezinsINTERACTIVE. “After my first meeting with Orhan and his team, I knew they were the agency for me. They understood where I was and, more importantly, where I wanted to go… dezinsINTERACTIVE certainly did not disappoint,” he said.

Graphic Designer Drew Reilley knew immediately the direction he wanted to take for the CUT branding design. He wanted it to stand apart from the “standard” jeweler identity. Reilley kept the design simple, minimal and clean. He finished with a three degree angle that rose from left to right.

“At the end of the day, it looked and felt right,” said Reilley, “So when it came to design the collateral, I wanted to make the same conscious effort to create something that would stand out.”

The card’s final touch, or proverbial icing on the cake, was to letterpress spot color print it with Mama’s Sauce, a company out of Orlando, Fla. The final version was exquisite, and it has received tremendous feedback.

“The branding and identity we created for CUT was intended to mimic the progressive, forward thinking mind set and attitude the company itself radiates,” Reilley also said.

Patton echoed Reilley’s sentiment and said that business cards are important, as they they leave behind an impression long after you are gone.

Likewise, dezinsINTERACTIVE managing partner Orhan Mc Millan said, “When you touch them, they get your attention. You knew you are touching something special, something unique. It’s totally different than anything you normally experience.”

The business card automatically has qualified for the National ADDY competition, which will take place in Las Vegas, Nevada.

McMillan explained how much this means for his company. “It’s essentially two-fold,” said McMillan, “On one hand, internally, it validates us and gives us the opportunity to dare even greater next time and step out of the traditional confines of design. Externally, it validates the growth and talent of the company itself.”

With their two Gold ADDY and Best In Show awards sitting proudly in the lobby of the office, it’s a constant reminder of the possibilities for the future. The team at dezinsINTERACTIVE looks forward to impress the design world and keep improving upon its successes.