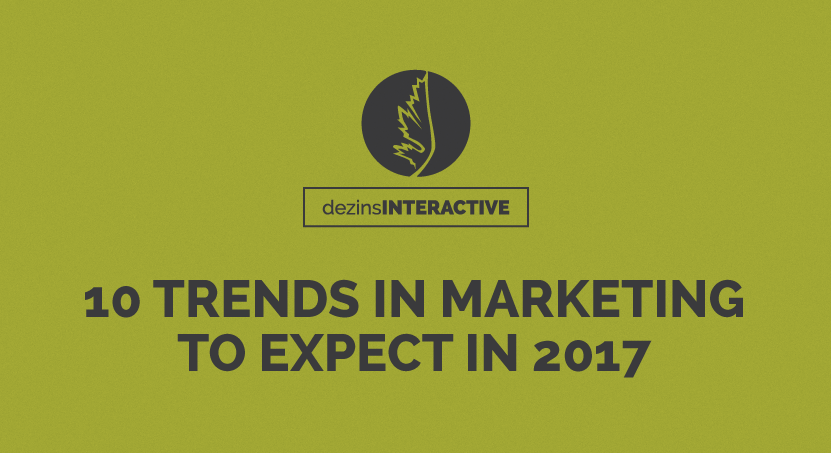 It’s that time of the year where every strategist should be taking a step away from the day-to-day and give a good hard look at the past year’s performance. After all, if you’re not paying attention to what has or hasn’t worked over the past year, how are you going to know what to adjust for in the future? For 2017, here are 10 trends you should be paying attention to:

There are two types of content: content you can read, and content you can interact with. In this day and age, interactive content is gaining more popularity. For example, BuzzFeed recently released a “Which City Should You Live In?” quiz and, since its initial launch, it has been one of their home-run pieces. The key is to think of ways to get readers to actively participate instead of passively consume. Interactive content can include assessments, polls, surveys, infographics, brackets and contests.

What’s more important than an effective ad selling your product? Having a lovable social media personality that speaks highly about your product to fans and followers, or in today’s terms, influencer marketing. Influencer Marketing is on the rise, as people are trusting recommendations more and more now than ever. With the right influencers, you can establish credibility through each individual social media post and advertisement you run. Fortunately, they work very well with brands, because when people genuinely believe in your product, that trust is passed onto more and more customers.

If you’ve been on any social media platforms lately, you’ve probably noticed the trend of livestreaming taking hold in most of these platforms. Although the kinks to this technology are still being worked out, it’s clear that livestreaming will continue to push the boundaries. Between Instagram’s integration of a livestream option into its Stories feature and the introduction of Facebook Live, it’s evident that we’re going to see a lot more of this in 2017.

One of the biggest hits in 2016 involved watching a screen-afflicted population carry their mobile devices out into the world to catch, you guessed it, Pokemon. Overall, the biggest takeaway from this phenomenon was the ability to drive real business results from effective advertisement. This game was the first of its’ kind, as it successfully brought the online into the real world, but surely won’t be the last that we see of this phenomenon.

What gives Snapchat its appeal? The fact that the content disappears, of course. The quick and rapid rise that Snapchat has gained in popularity has done a lot more for the world of social media than just giving users another platform to choose from, it showed the value of short-lived content. This is a key attraction for Generation Z, and is why you should be integrating short-lived content into your content strategy.

Internet traffic is now coming more from mobile devices than desktops, meaning that the future is mobile. If you aren’t catering your content to the mobile user, then you are missing a massive opportunity. Remember, it’s not just about optimizing for mobile, it’s about making sure that your content gets integrated with one’s lifestyle on the go.

Personalization, or segmenting your content to reach different types of audience members based on their preferences and habits, is vital in the world of marketing and is easier to execute now more than ever. The most common of this strategy is through lists, where certain types of content gets sent to certain users based on which lists they’ve opted into. In a world of too much content and not enough time, personalization is a huge win for brands looking to earn and gain attention from their consumers.

What’s one of the most effective ways to extend your story? Give it a feel-good element. Studies show that brands that partner with nonprofits, charities, or set up internal “give back” programs tend to have a much stronger presence as their stories resonate well with the hearts of consumers.

Because users are typically already on a social platform when they see something they want to purchase, why should they have to leave in order to buy something? In this day and age, purchasing no longer needs to happen on a third-party site. Because of advancements through Facebook and Pinterest, “Buy” buttons are quickly turning these platforms into social shopping experiences.

We’ve seen many new trends in 2016 that appear to show no signs of slowing down, and as the first month of 2017 comes to a close, it’s evident that we’ll be in for an interesting ride this year. Marketing to consumers has changed drastically since the internet has taken hold on society, but it has also adapted to the change tremendously well. There’s no way to predict the change that will come, but by staying on top of the latest trends, you’re already a step ahead.